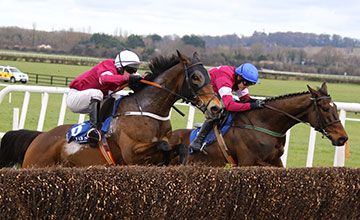 THE absence of the recently retired Don Cossack, who won the Grade 3 Ladbrokes Ireland Kinloch Brae Chase in 2015 and 2016 – last year en route to Cheltenham Gold Cup glory – means festival clues this time might be thinner on the ground. But the blurry Ryanair Chase picture could become a lot clearer.

Black Hercules began the campaign as ante-post favourite for the Ryanair following his impressive victory in last season’s JLT Novices’ Chase at the Cheltenham Festival, but his season has failed to take off, with below-par efforts in Grade 1s at Punchestown and Leopardstown leaving him with questions to answer.

Sub Lieutenant has answered most questions Henry de Bromhead has asked of him. His handicap mark has soared from 145 to 162 and his close third behind Djakadam and Outlander in the Grade 1 John Durkan Chase at Punchestown confirmed the suspicion he is a live contender for the Ryanair.

"He's in great form," said the trainer. "It's a competitive race, as you'd expect, but it looks ideal for him. He's done well since the John Durkan."

Sizing John has spent most of his life looking at the backside of Douvan so will be delighted that rival is nowhere to be seen here. Jessica Harrington has entered last year’s Racing Post Arkle runner-up in the Irish Gold Cup, so she certainly doesn’t seem to think stamina will be an issue.

Smashing, likewise, runs in the colours of Alan and Ann Potts, but he has yet to recapture the form that led to him toppling Road To Riches at Navan last April. He is another on a retrieval mission.

The six-runner field is completed by veterans Boxing Along and Letter Of Credit, who are now 12 and 13. Victory for either would be a shock.